1915 Gallipoli (Dardanelles)
Ataturk’s outstanding leadership qualities were first recognized during the
1915 Battle of Gallipoli
(also known as the Gallipoli Campaign, Dardanelles Campaign, and "Çanakkale Savasları")
The courage and sacrifices of the defenders of Çanakkale inspired the Turkish nation to unite under Ataturk's leadership and to defend Atatürk’s principles and revolution
during and after the War of Independence, and as the Republic was founded.
These principles and ideals are the foundations upon which Turkey stands today. 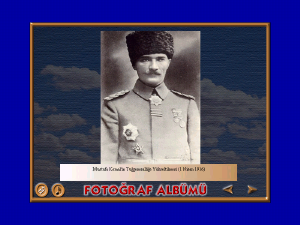 The year 2015 will be one of the most important years in the history of the Turkish Republic. Throughout 2015 Turks will be celebrating the beginning of the creation of the Turkish nation and national spirit. The 2015 centenary will also mark the rise of Mustafa Kemal Atatürk, whose leadership laid the foundations of the Turkish state.

One of the most symbolic houses in Turkey can be found along a narrow street in Gallipoli, which is linked to the heart of a small village's main square. It was here in this inland village of Bigali that Atatürk established his headquarters in a small house just before the war began. It was also here that Mustafa Kemal, as the commanding officer of the Ottoman Army's 19th Division, received news that British-led forces, including the brave but inexperienced Australian and New Zealand Army Corps (ANZAC), were landing on the peninsula.

Thus, as Atatürk set out from a seemingly ordinary town on the hills of Bigali towards the coast to battle British-led forces, he also began his march to his destiny.

It is from the second floor of this two-story house that the leader of a nation was in the making and preparing his offensive plans. The headquarters and house where Atatürk stayed became a museum in 1973 after the establishment of the "Çamyayla Atatürk Museum Founding Committee" which enabled the purchase of the house from its owner. The museum has displayed military and civilian garments and photographs as well as items personally used by Atatürk. One of the original items in the house is a desk used by Atatürk, undoubtedly for planning war strategies and viewing maps.

One enters the house after passing through a small courtyard from where the main door opens. On the ground floor there are one large and two small rooms. A wooden stairway leads to a living room on the first floor to which three rooms are connected. The room in the middle is the largest and was the study of Atatürk. The room to the right was his bedroom. The other room was used by his aide. Each of the rooms has wooden ceilings and floors. Atatürk's desk is in the study room.

An informed visit to the peninsula and a study of its geography offer greater appreciation of the unexpected hardships faced by combatants. The predictions of enemy landings by the German Gen. Otto Liman von Sanders, who was commander of the 5th Army for the defense of the Dardanelles, proved wrong. The invading forces landed their troops at Seddülbahir (Cape Helles) and Ariburnu (Anzac Cove) on April 25, 1915, after the French made diversionary landings to mislead Turkish troops. As a result of von Sanders miscalculations, the positioning of Turkish troops was not advantageous to winning the battle. Confusion also arose amidst the British-led forces when ANZAC troops failed to land on the intended beaches.

Atatürk, however, devised his own strategy and took his own initiative without authorization from von Sanders, as he assessed the significance of the landings. After ordering his division forward over the rugged countryside between Bigali and the coast, Turkish forces succeeded in stopping the enemy at Conkbayir. In addition to Seddülbahir, the peak and surrounding hilly areas of Conkbayir are known as one of the bloodiest grounds of the Gallipoli war, where Turkish forces prepared to die for the land that Western powers were carving up.

Mustafa Kemal's famous order to his soldiers, "I am not giving you an order to attack, but I am ordering you to die!" is said to have played a decisive role in the battle.

Atatürk not only led Turks in winning the battle of Gallipoli but also ignited an enduring sense of national identity. Looking back at the emergence of modern Turkey, Atatürk's house in Bigali is a remarkable reminder of how Turks found the strength and vision to mobilize forces to unite. It was here that the foundations of the Turkish nation were first laid and the enduring unity of a nation sprang forth. The upcoming centenary should be an opportunity for Turks and peoples of other nations to better understand the significance of Gallipoli for Turks.

As the centenary celebrations of 2015 near, there will be a heightened sense of the value and ideals upon which Turkey was founded, especially as the present generation assumes responsibility and strives to follow in the footsteps of one of the greatest statesman of history, who led the Turkish nation to achieve great things.

The sacrifices of other soldiers will also be honored as Turks together with the peoples of many countries and remember those who came from great distances to fight at Gallipoli.

While the Armenian diaspora and supporters of an alleged 1915 Armenian genocide fail to objectively present all the events of 1915, the approaching centennial can serve to provide more balanced accounts of all the facts of World War I. If nations do not take these opportunities to educate their children with a fair and accurate understanding of history, they risk having young minds dangerously misled by the conflicts and hostilities of the past.